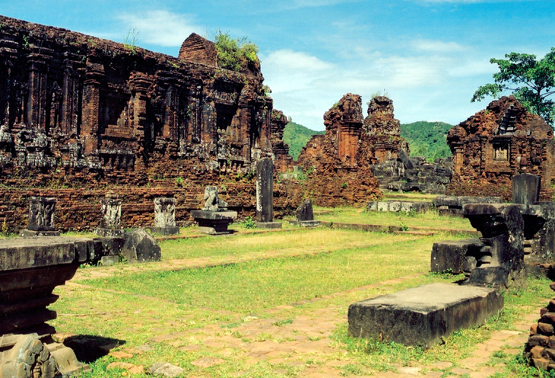 My Son, located 69 km southwest of Danang, was an imperial city during the Cham dynasty, between the 4th and 12th centuries. My Son Sanctuary is a large complex of religious relics that comprises more than 70 architectural works.

They include temples and towers that connect to each other with complicated red brick designs. The main component of the Cham architectural design is the tower, built to reflect the divinity of the king

According to records on the stone stele, the prime foundation of the ancient My Son architectural complex was a wooden temple to worship the Siva Bhadresvera genie. In the late 16th century, a big fire destroyed the temple. Step by step, historical mysteries were unveiled by scientists. Through stone stele and royal dynasties, they proved My Son to be the most important Holy Land of the Cham people from the late 4th to the 15th centuries. For many centuries, the Cham built Lip, a mutually linked architectural complex, with baked bricks and sandstone. The main temple worships the Linga-Yoni, who represents the capability of invention. Beside the main tower (Kalan) are several sub-towers worshipping Genies or deceased kings. Although time and the wars have destroyed some towers, the remaining sculptural and architectural remnants still reflect the style and history of the art of the Cham people. Their masterpieces mark a glorious time for the architecture and culture of the Cham, as well as of Southeast Asia.

Each historical period has its own identity, so that each temple worshipping a genie or a king of a different dynasty has its own architectural style full of different impression. All of the Cham towers were built on a quadrate foundations and each comprises three parts: a solid tower base, representing the world of human beings, the mysterious and sacred tower body, representing the world of spirits, and the tower top built in the shape of a man offering flowers and fruits or of trees, birds, animals, etc., representing things that are close to the spirits and human beings.

According to many researchers of the ancient Cham towers, the architectural art of the Cham towers at My Son Sanctuary is the convergence of different styles, including the continuity of the ancient style in the 7th-8th centuries, the Hoa Lai style of the 8th-9th centuries, the Dong Duong style from the mid-9th century, the My Son and My Son-Binh Dinh styles, etc. Among the remnants of many architectural sites excavated in 1898, a 24 metres high tower was found in the Thap Chua area and coded A I by archaeologists and researchers on My Son. This tower is a masterpiece of ancient Cham architecture. It has two doors, one in the east and the other in the west. The tower body is high and delicate with a system of paved pillars; six sub-towers surround the tower. This two storey tower looks like a lotus flower. The top of the upper layer is made of sandstone and carved with elephant and I ion designs. In the lower layer, the walls are carved with fairies and water evils and men riding elephants. Unfortunately, the tower was destroyed by US bombs in 1969.

After the My Son ancient tower complex was discovered, many of its artifacts, especially statues of female dancers and genies worshipped by the Cham people, worship animals and artifacts of the daily communal activities, were collected and displayed at the Cham Architecture Museum in Danang city. Although there are not many remnants left, those that remain display the typical sculptural works of cultural value of the Cham nationality. Furthermore, they are vivid proof, confirming the history of a nationality living within the Vietnamese community boasting of a rich cultural tradition