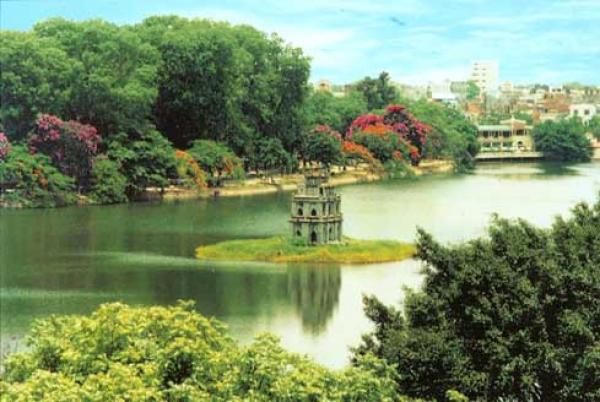 is arguably Asia s most charming capital city. Hanoi, meaning ‘where the river bends is a city of broad, tree-lined boulevards, elegant French villas and colonial-era buildings painted in muted hues of yellow and orange. It is also one of Asia s greenest cities with an abundance of parks and lakes as well as a host of cafes and art galleries and an Old Quarter steeped in history.

By day the city hums with commerce and moves at motorbike speed; by night the city is an enchanting, 19th century Asian village best experienced from the seat of a silent cyclo.

Hanoi sits alongside the Red River, Vietnam s second largest river. Beneath modern-day Hanoi lie artifacts and relics of the early Bronze and Iron ages, dating back to 2,000 B.C. The city was officially founded in 1010 by Emperor Ly Thai To, who in 1010 renamed the area Thang Long or Soaring Dragon. Soon after some of the citys oldest structures were built including the Temple of Literature , Vietnam s oldest university.

In the 17th and 18th centuries the city experienced rapid growth due to the expansion of foreign trade. In 1786, the Tay Son Army from the south invaded northern Vietnam and united the country. During the Tay Son reign the capital was moved south, to Hue , where it remained throughout the Nguyen Dynasty. Indeed Hanoi had to wait until 1831 to regain its former name, when Emperor Minh Mang established it as the capital of the Northern Province . The citys main period of growth stems from the arrival of the French in 1888. Fortunately many of the old boulevards and residences have survived and are used to house Foreign Embassies and Government institutions. From 1902 until 1953 the city served as the capital of French Indochina, although in 1945 Ho Chi Minh proclaimed in his independence speech from Ba Dinh square that Hanoi would henceforth be the capital of Vietnam . Today Hanoi is a bustling capital city of nearly 4 million people.