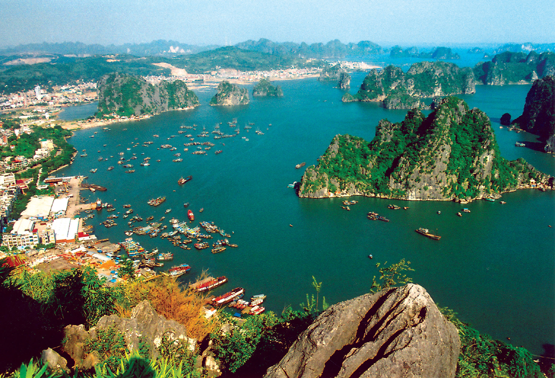 Situated in the North-East region of Vietnam, Halong Bay is a bay in the Gulf of Tonkin comprised of regions of Halong City, the township of Cam Pha, and a part of the island district of Van Don. Halong Bay borders Cat Ba Island in the southwest, the East Sea in the east, and the mainland, creating a 120 km coastline.

Halong Bay is made up of 1,969 islands of various sizes, 989 of which have been given names. There are two kinds of islands, limestone and schist, which are concentrated in two main zones: the southeast (belonging to Bai Tu Long Bay), and the southwest (belonging to Halong Bay). This densely concentrated zone of stone islands, world famous for its spectacular scenery of grottoes and caves, forms the central zone of Halong Bay, which has been named a UNESCO World Heritage Site.halong.gif (32648 bytes)

The bay itself has an area of 43,400 ha, consists of 775 islands, and forms a triangle with the island of Dau Go (Driftwood Grotto) to the west, the lake of Ba Ham (Three Shelter Lake) to the south, and the island of Cong Tay to the east.

Viewed from above, Halong Bay resembles a geographic work of art. While exploring the bay, you feel lost in a legendary world of stone islands. There is Mans Head Island, which resembles a man standing and looking towards the mainland. Dragon Island looks like a dragon hovering above the turquoise water. La Vong Island resembles an old man fishing. There are also the islands of the Sail, the Pair of Roosters, and the Incense Burner, which all astonishingly resemble their namesakes. The forms of the islands change depending on the angle of the light and from where the islands are viewed. At the core of the islands, there are wonderful caves and grottoes, such as Thien Cung (Heavenly Residence Grotto), Dau Go (Driftwood Grotto), Sung Sot (Surprise Grotto), and Tam Cung (Three Palace Grotto).

Halong Bay has many links to the history of Vietnam. For example, there are such famous geographical sites as Van Don (site of an ancient commercial port), Poem Mountain (with engravings of many poems about emperors and other famous historical figures), and Bach Dang River (the location of two fierce naval battles fought against foreign aggressors).

It has been proven by scientists that Halong was one of the first cradles of human existence in the area at such archeological sites as Dong Mang, Xich Tho, Soi Nhu, and Thoi Gieng. It is also a region of highly-concentrated biological diversity with many ecosystems of salt water-flooded forests, coral reefs, and tropical forests featuring thousands of species of animal and plant life.

With all this in mind, the 18th meeting of the Committee of the World Heritages of UNESCO (in Thailand on December 17th, 1994), officially recognized Halong Bay as a natural heritage site of worldwide importance.