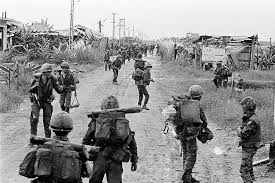 Quang Tri is located in the central Vietnam near the crossways between North and South Vietnam, Laos, and Thailand. Several different minorities populate this province (Kinh, Bru-Van Kieu).From 1954 until the defeat of the Americans in 1975, Ben Hai river marked the division of Vietnam.

5km either side of the river was declared a DMZ – a stark contrast to what really took place in this region. In fact, the surrounding region experienced some of the heaviest fighting during the Vietnam War. Some areas, such as Vinh Moc were termed Free Fire Zones, allowing a virtual free for all without fear of future repercussions and everything was designated a target. As a result of this heavy fighting, there is still heaps live ordnance lying around. There have been some casualties as unexploded bombs blow up when farmers are working on their lands nearby or children run up in a play. Khe Sanh, in particular, was immortalized during and after the conflict. Now when you catch the train or bus from anywhere South of Dong Hoi to the DMZ, bomb damage and craters are still evident in paddies, beside the railway tracks and beside the roads and bridges. As you get closer to Dong Ha you will notice huge eucalyptus groves, themselves a legacy of the war. These areas were completely devastated either by relentless shelling or defoliation during the war and were eventually replanted with eucalyptus trees, chosen for their durability and speedy maturity.